Noori Natt’s eyes crinkled as he stroked his flaring moustache. The floor to ceiling bars of his cell only seemed to enhance his legendary dash. He was enjoying the scene without feeling any discomfort at his situation.

On the manicured lawn of the Lahore, Qila Gujjar Singh police station, the little boy squealed with delight as his older brother picked him up and whirled him around while the girl clapped her hands and their young mother sat on a chair, smiling and knitting.

The old Police Stations in the Punjab are built around a hollow square entered through a gate protected by an armed sentry. Officers on duty sit in that block. The management offices face the entrance and the blocks on both sides connecting the entrance and offices are remand custody cells of which the inner wall looking out onto a lawn consists of steel bars.  There is no interrogation room — buttock beating on the well-cut lawn surrounded by flower-beds serves that purpose.

Beret set languidly back on his head, constable Hector Lal Din strolled indolently along the verandah running in front of the cell bars. Bloody hawalatis, he thought as he sporadically stroked the bars with his six-foot long stave, while scratching his itchy crotch with the other. As he neared Noori’s cell, he smartened up. Noori, a man with a name on both sides of the India Pakistan border, was not be trifled with and could also be the source of a fat tip.

Hector went up to the cell bars. “Jee Noori Jee?” he inquired respectively, ensconcing the renowned bandit’s name in respectful prefix and suffix.

“The magistrate who remanded me?”

“Safe place for them to play!”

The little boy suddenly started running in the direction of the cell, his brother behind him.

He came up the steps to the verandah and then stopped, staring at Noori.

“Daddy says it’s ok to talk to the good ones.”

“Hey, you little brat —” snarled the older boy, then stopped as Noori raised an authoritative hand.

“Don’t — your mother’s just behind you.”

The young mum in a shalwar kameez came up.

He was taken aback by the woman’s courtesy.

She nodded. “Yes, another human being with a family waiting for him. But you look well.”

“I’m due to appear for my first hearing in Gill Sahib’s court tomorrow. I’m locked up on his responsibility,” he added, eyes twinkling.

“You know about my husband. He’s never been accused of an unjust decision, or favouritism. And he doesn’t take rishwat bribes.”

“That’s the worry, Bibi Jee!” he remarked with a twinkle in his eyes.

He noticed the cross around her neck and bowed his head. “May your Yesu Masih, our Hazrat Issa, bless us all, and Allah  protect your beautiful children.”

Susan Gill walked away with her children and Noori’s mind went back fifteen years, just at the outbreak of the Second World War.

During the monsoon, in a dramatic dawn raid on a jeweller’s haveli mansion to the east of the river Chenab, Noori had decamped with five kilos of gold strapped to the saddle of his milk white steed. A police party led by Superintendent Nicky Nicholson and Sub Inspector Sant Singh Caleb Gill were hot on his heels. Pouring rain in a gale-force wind neither deterred them nor their horses, nostrils flared, snorting and foaming with effort and excitement.  After half an hour’s unchecked gallop the police were unable to shorten the distance between themselves and Noori’s steed. The waves in the mighty Chenab seemed to reach up and touch the black sky drenching them to the bone. Without checking his steed, Noori plunged straight into the jaws of the mighty Chenab in spate.

Superintendent Nicky Nicholson, pulled in the reins of his galloping mount. The horse raised its forelegs and neighed in the classic stance of a checked gallop and so did the rest of the party. An expert, left-handed shot, Nicky drew his revolver and sighted on the back of the receding Noori. Sub-Inspector Gill, riding to his right, pulled the left rein of his stallion and dug his left heel in its side, careening into his superior officer’s mount, and spoiling his aim. The shot went wide and Gill prepared to resume chase. Before he could fully disengage from his last maneouvre, Nicky had seized the reins of his subordinate’s stallion.

Both men glared at each other.

“No. I won’t lose my best officer to the bloody Chenab for a dacoit.”

“But you’d shoot him in the back, Sahib? He’s a man among men and deserves as much!”

A millisecond’s face-off, then teeth shone through brown and white-tanned skin. Both officers exchanged nods, they wheeled their horses in an about-turn and dug their heels into their sides. The elite Punjab Police patrol galloped behind them amid the screams of their ancestral war cries.

The news of Sub Inspector Gill saving Noori’s life spread across the length and breadth of the Punjab. Shortly, Gill was tragically killed in the line of duty, but Noori was unable to pay his respects at his funeral.  Noori’s arrest warrant, however, was submerged by the blood-letting madness of the 1947 Partition riots between Hindu / Sikhs and Muslims. Noori excelled himself by leading mounted parties to protect Muslim refugees fleeing Indian territory. And on the way in, he redeemed himself by taking Hindu / Sikh refugees into India. But he was unable to pay his respects at Gill’s funeral, and by the time Paartition settled it was too late and Gill’s younger brother was busy entrenching his magisterial reputation to replace his brother’s. It weighed heavily on Noori’s shoulders.

Noori shook his head. Hector had broken his reverie.

“There’s a message for you that was phoned into the office.”

The sudden lack of expression on Noor’s face told Hector how important the innocuous message was.

“All is well at home and elsewhere.”

“Thank you, Hector. You’ll be looked after.”

Hector bowed his head and strolled away.

Noori’s heart soared. At dawn, he would quietly walk out of his unlocked cell door and past the sentry, from where a Chevrolet Impala would take him to a private aircraft at Walton airport outside Lahore. He would be provided with two genuine passports in different names, foreign currency and a weapon.  In a few hours he would be in Dubai. Then another thought hit his gut. 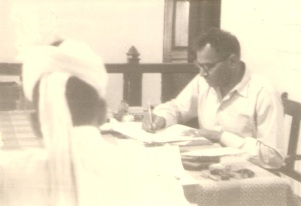 A. P. Gill holding court: the turbaned head is that of the court reader

Arthur Paul (A. P) Gill, section 30 magistrate, Lahore, was sub inspector Sant Singh Caleb Gill’s kid brother. Known in his family as Nikka’a, or kiddo, he had always wanted to be a magistrate and was fast-tracking his way to become a legend. Every morning he got in half an hour early to look over the day’s case files and today was no exception. Little did he realize, sitting on the dais, flipping the pages of Noori’s case file, that this day would be another personal and professional landmark. The fan whirred overhead and the morning was still fresh at that time.

Nikka’a grunted without raising his head.

Footsteps neared the dais. Nikka’a finished the page, looked up and the world stood still.  A. P. Gill suddenly felt being stared at, and looked up from The Pakistan Times. His blood ran cold, he silently started reciting the 23rd Psalm but maintained his composure. He looked straight into the eyes of the smiling, handsome face.

“Oi, Noori’a’a, what the hell are you doing here, without handcuffs, or a police escort!” he demanded, then smiled wryly. “You’re early!”

“So are you, Gill Sahib,” Noori replied, adjusting the two-horse chinese boskey silk kurta over his shalwar with one hand. The other hand held a smart leather briefcase. “But if I’m here, it’s not to hurt you, but to offer you a gift.”

“You insolent dog, I could take you apart with my bare hands,” Gill said flatly.

Noori inclined his head. “We who live apart from your society know you’re a hard man, Sahib-ji. Give me five minutes, then take me apart or call your police.”

Gill looked deep into Noori’s dark brown eyes, made a decision, glanced at his watch, and nodded.

Noori stepped forward, and put the briefcase on top of the railing that separated a magistrate’s dais from the public, clicked it open, then spun it around so Gill could see the contents.

Gill scowled at the contents.

“Check the revolver, Sahib-ji, and both passports.”

Gill removed the .38 Smith and Wesson revolver between two passports lying over packets of neatly stacked foreign currency, opened the cylinder, saw the shining brass of the cartridges, closed it, and offered it to Noori butt forward.

Noori pressed a lever, let the cartridges roll onto his other palm and put the revolver on the railing.

Gill grunted, and flicked open the passports, one British, the other Turkish. The picture in both documents was Noori’s, but not the names.

Nikka’ah put the phone back on its cradle and looked down at Noor.

“All right. What’s this tamasha all about?”

“Your brother spared my life. In return, I can’t steal your career — and it’s a brilliant one, Sahib jee! Had I said that I could escape at will in court later today, what would you have done?”

“Had you buttocks beaten to shreds!” Nikka’ah said with a grin. “So what are you hoping for?”

Gill nodded. “It will be done. Now fuck back to police custody before I change my mind and shoot you dead on the spot!”